Lucknow: During an event in Uttar Pradesh's Ghaziabad area, another case of spitting on food was found. Shadab is claimed to be the accused. On social media, Shadab's video of him spitting on tandoori roti during an engagement ceremony has gone viral. Shadab was detained after police lodged a complaint. Shadab stated during the interrogation that he had been doing this for many years. On Thursday, the incident occurred (November 25, 2021). 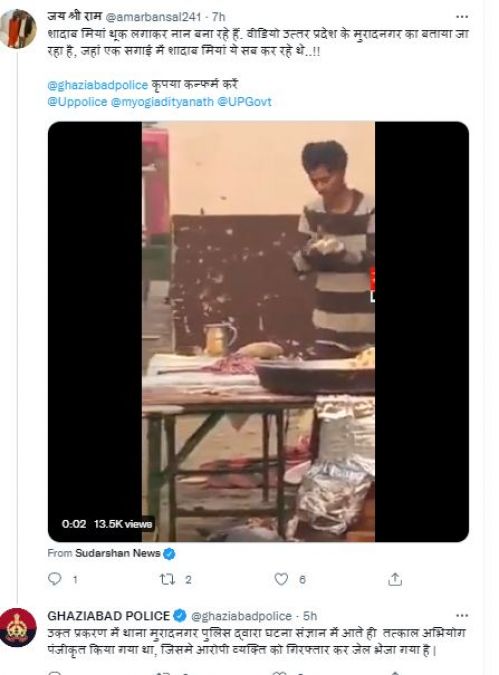 According to claims in the media, the video that has gone viral on social media comes from Ghaziabad's Raj Palace Farm House. The farm home is in the Muradnagar police station area, near Kakada hamlet on Rawli Road. Shadab, a resident of Minara Masjid, was summoned to bake naan as part of an engagement ritual. Shadab spitting in the naan, according to one of the attendees. He was apprehended and the Hindu Yuva Vahini, as well as the police, were alerted. After obtaining information, police raced to the scene and detained Shadab. The Hindu Yuva Vahini has requested that Shadab be prosecuted under the NSA. Ayush Tyagi, a Hindu Yuva Vahini office holder, created the video.

"The engagement was in a Tyagi family in Kakada village itself," complainant Ayush Tyagi told the reporters. At the event, I was also present. I produced the video immediately after learning about Shadab's performance. After being arrested, he initially refused, but subsequently revealed that he had been spitting on the bread for quite some time. The accused Shadab, on the other hand, has been charged under Sections 269 and 270 of the Indian Penal Code (IPC), Section 3/4 of the Epidemic Act, and Section 51 of the Disaster Management Act, according to the police official. Tell me, many similar examples have come to light in which the accused, like Shadab, claim to have been spitting in meals for many years but have not been given an explanation as to why they do so.