Varanasi: In Kashi, the city of Baba Vishwanath, the unrighteous threw out the Trident installed there, breaking the idol of Shivling and Hanuman Ji in the 50-year-old temple located on the Central Jail Road. When the local people came to know about this, they created a ruckus. During this, people also raised slogans against the police administration. ADCP Varuna Zone Manish Kumar Shandilya reached the spot along with Police Force as soon as the incident was reported. Seeing the opposition, new statutes have been ordered and sanctified according to the rules and regulations.

ADCP Varuna Zone Manish Kumar Shandilya has informed in this regard that CCTV footage is being checked from many places in the area. Unidentified people tried to vitiate the atmosphere. Those who are seen roaming around the temple even at night will be questioned. New idols have been brought in and sanctified. The force has been deployed so that the atmosphere does not deteriorate.

Local resident Bablu has told that some suspicious people are often seen. These people can also be drug addicts. In the morning, when people reached the temple to worship, someone had broken the idol of Shivling and Hanuman Ji. The trident was taken out from inside the temple and thrown outside. What was the intention of the anarchists, it will be clear only after they will be arrested. There is a lot of resentment among the local people.

Married woman raped by Asif, who came on pretext of repairing the fridge 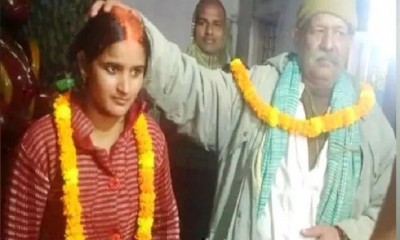