Kolkata: 600 academicians in the country have written to the violence that erupted after the landslide victory of trinamool Congress (TMC) led by state Chief Minister Mamata Banerjee in the assembly elections in West Bengal. The educationists have warned the Mamata Banerjee government not to play with constitutional values by creating an atmosphere of violence against political rebels. The letter writers include academicians like Professor, Vice Chancellor, Director, Dean and former Vice Chancellor. 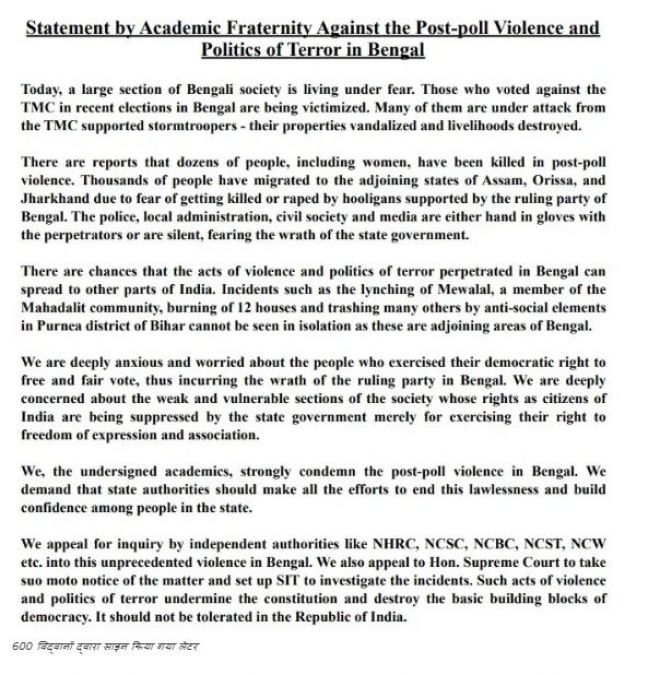 The educationists have demanded the Mamata government to stop the vendetta in the state. The letter said that criminal people belonging to TMC are attacking people of their opposite ideology. The letter also said that thousands of people have been robbed along with damaging their property. The letter claims that a large section of the society which does not vote for TMC in Bengal is living in the shadow of a century. These sections are suffering by TMC supporters. Thousands of people are taking shelter in Assam, Jharkhand and Odisha for fear of murder, rape and loot. More and more media, police and administration are either with criminals or silent from the fear of the State Government.

The academicians who signed the letter have expressed concern for those in Bengal who had to face the wrath of the ruling party (TMC) for exercising their democratic right to free and fair voting. "We are concerned about the weaker sections of the society who are being harassed by the government for exercising their right as citizens of India," the academicians mention in the letter. At the same time, the academicians in their letter have demanded an inquiry into the Bengal violence from the SIT appointed by the Supreme Court. He also asked independent agencies to investigate the post-election violence in West Bengal.