Hyderabad: The process of setting up six domestic airports in the districts is likely to start expeditiously next week. The meeting with the Executive Director (ED) rank officers of Airports Authority of India AAI will pave the way for speedy processing of proposals. “We have already requested the AAI to convene the meeting at the earliest. A letter has already been written in this regard. We are confident that the meeting early next week will prove to be fruitful,” a top official from the Roads & Buildings (R&B) Department, who is coordinating with the AAI, told .

The AAI has already submitted the techno-economic feasibility report after completing the Obstacle Limitation Surface (OLS) survey, soil testing and other inspections at the proposed domestic airport sites in Adilabad district, Bhadradri-Kothagudem district, Basantnagar in Peddapalli district, Mamnoor in Warangal Urban district, Jakranpally in Nizamabad district, Devarkadra in Mahabubnagar district. The official said the meeting would discuss the techno-feasibility report besides taking up necessary clearances required for the construction of these airports along with the design of buildings and runways. “We will also discuss the necessary assistance to be required from the AAI in completing the construction work,” the official said.

Telangana has only one operational airport in Shamshabad for commercial air operations while another airport in Begumpet is being used for emergency purposes and VIP flights. Since AAI had already conducted the survey at the field level, the hand-holding of the Central agency, which deals with airport operations across the country, would be significant in completing the construction at the earliest, he said.

After nearly 500 years, Shri Ram sat on a silver swing, watch the video 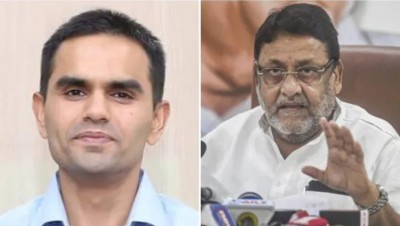