Ranchi: A major incident is coming to light from Ranchi, the capital of Jharkhand, where eunuchs who came to take congratulations created a lot of ruckuses. The house where they had come to take was vandalized. A vehicle parked outside the house was also damaged. Photographs related to the incident showed the vehicle also being vandalized.

According to the news received, the locals, angry with this act of eunuchs, beat them up. 2 eunuchs have been injured in the assault. They have been admitted to RIMS. This whole case is of Edalhatu located in Bariatu of the capital Ranchi. It is said that on Wednesday afternoon, eunuchs had come to a house to take congratulations. The eunuchs, who arrived in the group, demanded Rs 50,000 as congratulations from the homeowner.

It is alleged that when the time family refused to pay the money, the eunuchs ransacked the house a lot. Seeing this, the locals got angry and beat up the eunuchs. Two eunuchs were injured in the assault. It is being told that both of them have suffered injuries on the forehead. They are undergoing treatment. At present, the police intervened and pacified the matter and are investigating the incident. Those involved in the assault are being identified. 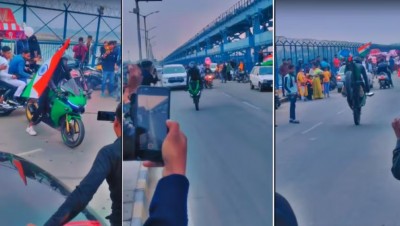