Feroz Khan is one of the most loved actors of his time. Feroz Khan born Zulfiqar Ali Shah Khan, was an Indian actor, film editor, producer and director, who is best known for his work in hindi cinema. He appeared in over 60 films throughout his career and became one of Bollywood's popular style icons. Feroz Khan once wanted to marry Mumtaaz one of the most famous actresses of that time and various Big stars at that time wanted to marry her.

Mumtaaz in an interview speaking about Feroz Khan said, "Feroz never offered me marriage. He had a girlfriend, an Anglo-Indian beauty, from the days of ‘Main Shaadi Karne Chala’. She was a very beautiful girl and she loved him immensely. But I don’t know why they eventually separated. So Feroz and I had become very good friends and he shared almost everything with me. He was a man who would never share anything with anybody; he was a proud man. But I have seen him even with tears in his eyes."

The actress further said, "Okay now let me tell you that any woman would fall on Feroz and Shammi. To marry Feroz Khan was like jumping into a lake. It was asking for a heartbreak. I had one with Shammi Kapoor and I didn’t want another. So I kept our relationship as a friendship. If it had gone the other way, it would have broken and even the friendship wouldn’t have remained. Our children went on to marry each other, and our friendship remained till he died. He loved me a lot and trust me, Fardeen and Natasha (Feroz’s daughter) are very happy with each other."

Feroz Khan made his entry on the silver screen in 1960 after his return from a Bangalore-based English medium school. His career initially started as a hero in 'Didi', then he signed up for villain roles, and then made a comeback as a hero again. His noteworthy movies are Oonche Log, Main Wohi Hoon, Aag, Mela, Upasna. He became even more popular after the release of Dharmatma, Qurbani, Jaanbaaz, & Dayavan. he got an award for his role in Aadmi Aur Insaan. He died of cancer in his Bangloore farm house on 27 April, 2009. 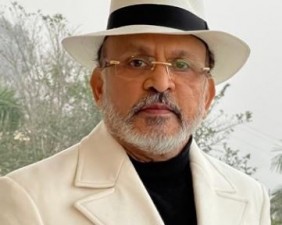