If the devotees are happy then God will also bless us: Endowment Commissioner Dr M Hari Kurnool: Endowments Commissioner Dr M Hari Jawahar Lal held a review meeting with the Executive Officer (EO) and other officials at the temple administration building on Saturday. Speaking on the occasion, he said that Srisailam temple has great importance among other Shiva temples. He directed the officials to provide good facilities to the devotees visiting the temple during Dussehra Brahmotsavam. and ordered to take all steps to develop the temple into a global spiritual center. He also directed the officials to plan programs on spiritual, cultural and other aspects so that they could inculcate the spiritual spirit among the devotees.

He also discussed the security of the temple and the precautions to be taken with the officials. He visited the command control room set up in the temple and inspected the vehicular movement from the control room to the toll gate, Pathala Ganga, Qatar complex, prasad distribution centers and others. Temple executive officer S Lavanna briefed the commissioner about the construction of Ganesh Mandapam, development of Nakshatra Vanam, development of temple Madvedi, queue complexes, dormitories, museum and others. Later he discussed about the arrangements made for the Dussehra festival. Before the review meeting, Hari Jawahar Lal visited the presiding deities and offered special prayers. 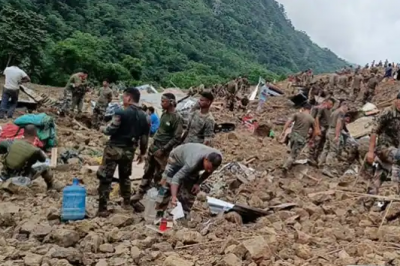