Srinagar: The police have made an important disclosure about the murder of DG Hemant K Lohia in the Union Territory of Jammu and Kashmir. Police said the main accused in Lohia's murder is his servant Yasir. He is a resident of Ramban. According to the police, he was extremely aggressive in behaviour and was depressed. Not only this but a diary of killer Yasir has also been found in the hands of the police. In this, he has also written many poems. 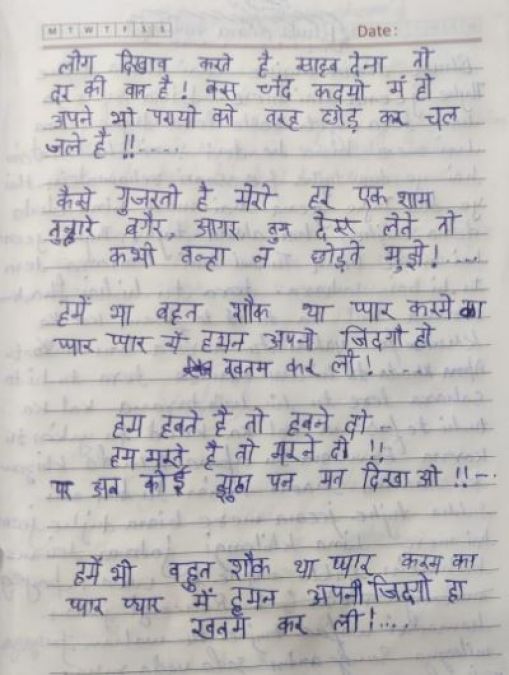 Jammu ADGP Mukesh Singh has informed that preliminary investigation has revealed that servant Yasir Ahmed is the main accused. He was very aggressive in his behaviour and, according to sources, was also in depression. He said that no terror angle has been found in the investigation so far. However, it is being investigated to confirm it. Police have recovered the weapons used in the murder, he said. He said that some such papers have been found, which show his mental state. Police have also collected some CCTV footage from the vicinity. In this, the accused is seen running away after the incident. He was working at the house of Lohia of DG Hemant for the last 6 months. The police have also released the picture of the accused.

Police have recovered a diary from the spot. In this, accused Yasir has written poems. In these poems, there is a sign toward ending his life. He wrote in a poem, 'We drown, let us drown. If we die, let us die.' At the same time, the body of Lohia of DG Hemant was found at his friend's house in Udaywala, Jammu. where he was living. He was murdered by slitting his throat. Along with this, injury and burn marks have also been found on his body. DGP Dilbagh Singh said that the accused had tried to burn the body of Hemant K Lohia.