Bollywood actress Janhvi Kapoor is now known for her style to her performance and people love her a lot. However, nowadays Janhvi Kapoor has been a part of a lot of discussions about her upcoming projects as well as her style, fashion and curvy body. New videos and pictures of Janhvi Kapoor go viral on social media day by day. Now once again a video of Janhvi Kapoor has hit the internet. In this video, she has been embarrassed in front of the paparazzi.

The video has actually been shared on an Instagram page called beyond_the_entertainment. Janhvi Kapoor is seen in a white and blue printed frock dress in the video. In the meantime, she has opened her hair and is wearing a mask. You can see in this video that Janhvi is moving towards her car quickly, but in the meantime, the paparazzi's start shouting her name to spot her on the camera. Meanwhile, when the actress turns to the camera to pose, there is a gust of wind and her frock starts flying. Her frock is also so small that it embarrassed Janhvi Kapoor in front of the camera.

She handles her frock in a hurry and moves towards the car. Now the video is going viral fast and many people are saying that 'Why to wear such a small frock?' Talking about the same work, Janhvi Kapoor will soon be seen in the films 'Good Luck Jerry,' 'Mili,' and 'Dostana 2.'

Aryan Khan to remain in jail, HC to hear bail plea on Tuesday 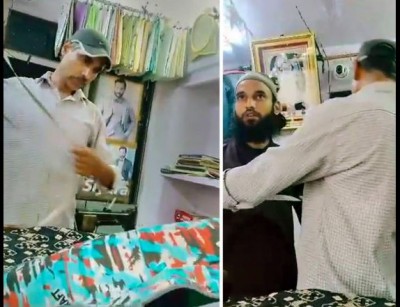