Today is the birthday of late actor Sushant Singh Rajput. Sushant was born on January 21, 1986 in Patna, Bihar. It has been nearly 2 years since Sushant Singh Rajput passed away but his memory is still fresh in the hearts of fans. #JusticeForSushantSinghRajput has been trending on social media since this morning. Fans around the world are remembering him by tweeting. Bollywood actress Kangana Ranaut has also remembered Sushant on his birthday.

Sharing a photo of Sushant, Kangana writes, 'Happy birthday to the shining star of the sky'. Fans are loving kangana's story. Let us tell you that somebody's tears are spilling on social media so somebody is speaking so quickly to go. One user wished Sushant a birthday and posted that he has never seen so much curiosity for an actor's birthday.  Thanks for always inspiring SSR.  Another user wrote: Be happy where you live. You are always going to be immortal in our hearts.

What Kangana said: Kangana Ranaut in an interview to a news channel after Sushant's death levelled some serious allegations against some of the veteran producers and directors of the movie industry which according to Kangana led to Sushant's suicide. In this controversial interview, Kangana Ranaut has said how film giants create a challenging atmosphere for talented actors coming from outside through nepotism and favouritism so that they do not move forward in their careers. Kangana had called Sushant's suicide a murder. 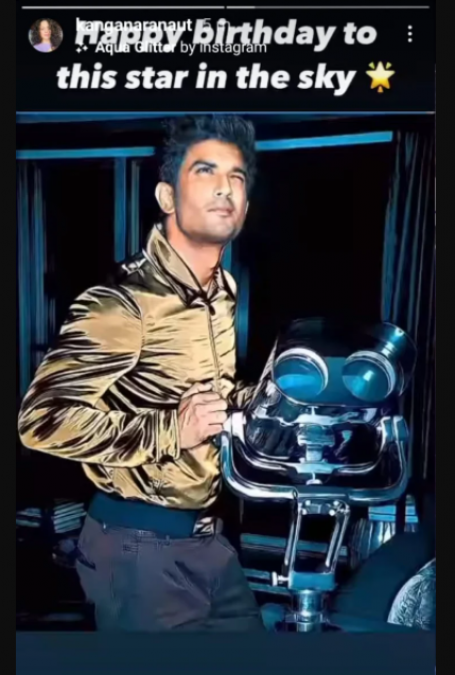