He further said, "Madhya Pradesh has more than 3.92 crore voters for panchayat elections. Out of these, 2 crores 2 lakh 30 thousand are male voters while the number of women voters is 190 lakh 20 thousand.''

Disclaimer : The views, opinions, positions or strategies expressed by the authors and those providing comments are theirs alone, and do not necessarily reflect the views, opinions, positions or strategies of NTIPL, english.newstracklive.com or any employee thereof. NTIPL makes no representations as to accuracy, completeness, correctness, suitability, or validity of any information on this site and will not be liable for any errors, omissions, or delays in this information or any losses, injuries, or damages arising from its display or use.
NTIPL reserves the right to delete, edit, or alter in any manner it sees fit comments that it, in its sole discretion, deems to be obscene, offensive, defamatory, threatening, in violation of trademark, copyright or other laws, or is otherwise unacceptable.
POLITICS NEWS CURRENT AFFAIRS POLITICIAN NEWS INDIAN POLITICS NEWS CURRENT POLITICS NEWS IN INDIA POLITICAL BREAKING NEWS
Share
Facebook
Twitter
Pinterest
WhatsApp
Koo 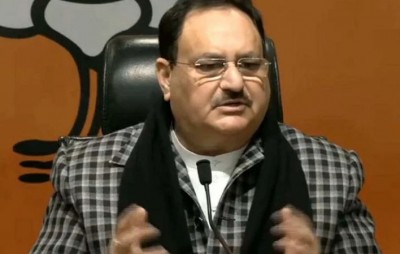