It is not necessary to show valour only on the battlefield: PM Modi 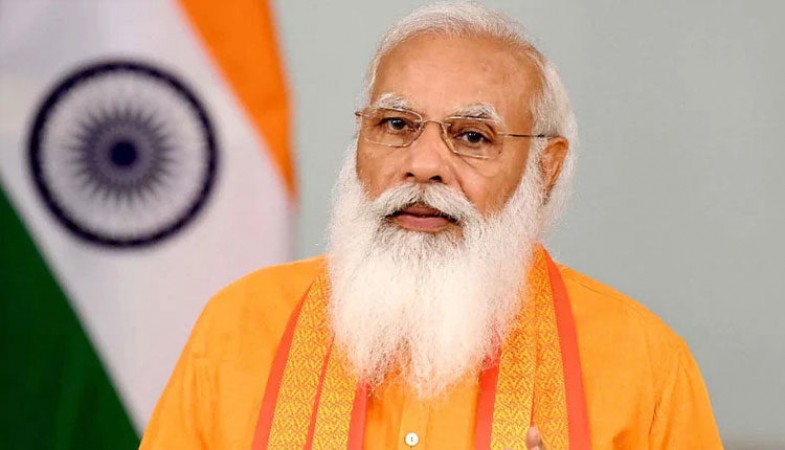 New Delhi: Prime Minister Narendra Modi is addressing the people of the country today through the radio programme 'Mann Ki Baat'. You must be aware that the Mann Ki Baat programme is prime minister Modi's monthly radio address. In his programme today, he mentioned the Amrit Mahotsav programme of Independence. In fact, first of all, PM Modi said, "Amrit Mahotsav inspires. The Amrut Mahotsav of Independence is being celebrated from Panchayat to Parliament. '

On the other hand, PM Modi further said, "Vrindavan is said to be a direct form of God's love. Our saints have also said, "This asa dhari chitta mein, this asa dhari chitta mein, kahat jaata mati mor. Vrindavan Sukh Rang Kau, Vrindavan Sukh Rang Kau, Kahu Nahin Paayao Aur.'' He said, "There are many States in our country, there are many areas where people have preserved the colours of their natural heritage. These people have kept alive the way of living together with nature even today. This is an inspiration for all of us also. It is not necessary that valour is shown only on the battlefield. When diversity expands, many tasks begin to be accomplished in every field.''

He also said, "The country also celebrates Navy Day and Armed Force Flag Day in the month of December. We all know that the country is also celebrating the golden jubilee year of the 1971 war on 16th December. I remember the security forces of the country on all these occasions, remember our heroes. Earlier, he said, "Amrit Mahotsav inspires us to learn and do something for the country, now whether it is the common people or governments, from panchayats to parliament, there is an echo of the Amrit Mahotsav and there is a continuous stream of programmes related to this festival.''