Today is the birthday of the country's Prime Minister Narendra Modi. We are all aware that the general public, as well as Bollywood stars, are an important part of life. There have been times when we have all seen Bollywood stars spend time with PM Modi for a variety of reasons. Today we're going to show you the pictures and which celebs are Narendra Modi's fans.

Akshay Kumar - You know that Akshay Kumar has met PM Narendra Modi on many occasions. He had also interviewed Modi some time ago in which he had asked Modi some interesting things which Modi had answered fiercely.

Sunny Deol-Sunny Deol stood by the BJP in the 2019 elections. After winning the Gurdaspur seat, Sunny met Modi and the two later tweeted and praised each other who you must have seen.

Shilpa Shetty- Prime Minister Modi launched the Fit India Movement in India and met Actress Shilpa Shetty, who has been inspiring people to live a fit life through social media. You may have noticed Shilpa took the blessings of PM Modi during the event.

Anupam Kher- Anupam Kher is a fan of Prime Minister Narendra Modi and Anupam meets Modi from time to time. He had recently arrived to give Modi his autobiography.

Salman Khan - The friendship between Prime Minister Modi and Bollywood superstar Salman Khan is quite good. In fact, on the day of Makar Sankranti, the two flew kites together, and not only did Salman put him on a bandage when Modi's finger got hurt.

Anushka Sharma - Actresses Anushka Sharma had come to invite her husband and Captain of the Indian cricket team Virat Kohli to the reception with Narendra Modi after her marriage and Anushka is always in support of her.

Find Out Interesting anecdotes about Narendra Modi, who once wanted to become a monk 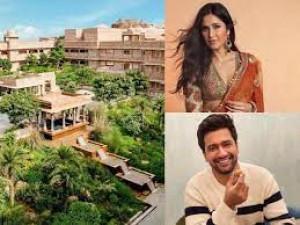 Will wedding of Katrina and Vick will take place in the Royal Pavilion, will be covered with glass? Aayush Sharma remembers the days of Struggle, said, ''Ranbir and Deepika had a background dancer..'