A video of Bollywood film actress Priyanka Chopra is going viral on social media these days in which she is seen criticizing her husband Nick Jonas. The video is from Netflix's show 'The Jonas Brothers Family Roast'. Which she shared on her Insta account. Priyanka's video has also been reacted to by south Indian film actress Samantha Ruth Prabhu.

The video came at a time when Priyanka surprised fans by removing the husband's surname from her social media account. After that, there was a strong rumour of their divorce. Fans were upset to think that there was no problem between Priyanka and Nick. Priyanka is making fun of Nick Jonas and his brothers in this video. While this video of her was well-liked on social media, Samantha has also reacted to it. Praising him, Samantha shared the video on her Insta story and wrote in the caption 'Amazing'. 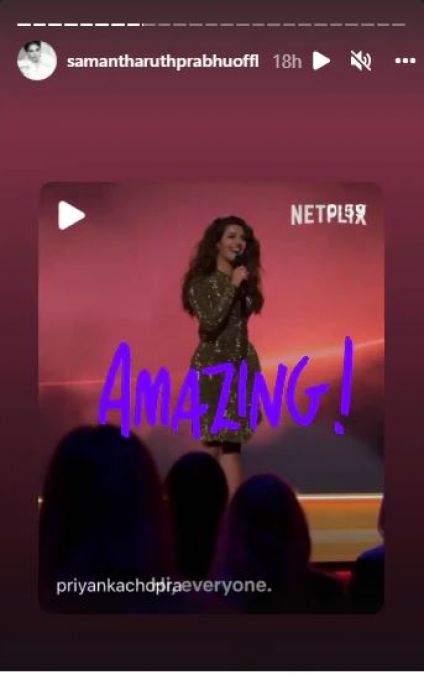 Priyanka Chopra is on stage in the video and is seen in front of Nick Jonas, his brothers Kevin and Joe Jonas. After which Priyanka says hi to everyone and starts pulling her husband a lot. Priyanka says that I am feeling very thrilled and proud that today she has come here to roast her husband Nick Jonas and his brother whose name I do not even remember.