India's most awaited musical movie 'Music School' by Ilaiyaraaja has also started shooting for its third schedule in Hyderabad. Sharman Joshi and Shriya Saran are playing the lead roles in this movie| Keeping in mind the third wave of the Covid infection pandemic, the makers of this musical have formed a team that also sanitizes the studio, shooting location and vanity van| The movie team is engaged in social distancing and using masks on the sets completely and rules have also been made that any new person in the set will have to undergo antigen test, in addition to this, it will be mandatory for the cast and crew members to get an RT-PCR test done once a week|

In case of any kind of medical emergency, the team has also arranged for a general physician| Despite all these challenges, the movie's director Papa Rao Biala is leaving no stone unturned to bring a rich scene and a spectacular sound to the audience by following due precautions|  The story of this movie is of 2 music teachers Mary D'Cruz and Manoj (played by Shriya Saran and Sharman Joshi) who have made those students who are involved in an equational education system aware of rich culture and music and theatre apart from studying books|

When the shooting of the third schedule started, Papa Rao Biyala said, "The second schedule of 'Music School' was very good. The entire team has enjoyed living in a musical atmosphere. We have also started shooting for the third schedule with full vigour in the new year| In the wake of the pandemic, we are busy working with the entire team by taking all the precautions| We make sure that only those who are absolutely needed are present on the set. It is a matter of great relief that the sanitization team is fully prepared and the movie team is also alert and taking care of everything. "

The movie 'Music School' is being produced by Yamini Films and written and directed by Papa Rao Biyala| It is composed by Ilaiyaraaja who is a bilingual (Hindi and Telugu) The cinematographer is Kiran Devohans and the cast of the film is Sharman Joshi, Shriya Saran, Shaan, Suhasini Mulay, Prakash Raj, Benjamin Gilani, Srikant Iyengar, Vinay Verma, Mona Ambegaonkar, Gracy Goswami, Ozu Barua, Bags Bhargava, Mangala Bhatt, Fani Igoti, and Waqar Sheikh. 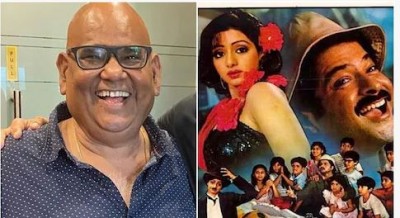