Fans love the duo of actor Sidharth Malhotra and actress Kiara Advani, one of the rumoured couples of Bollywood. The two are always spotted together. Their loved ones are keeping a close watch on every news related to the couple. There has been an interesting thing about them.

In fact, the two recently came into the limelight when actor Sidharth Malhotra was celebrating his 37th birthday. He was wished by all his loved ones on the occasion. In the same vein, his girlfriend Kiara Advani has also given him a cute caption. She shared a picture of him and Siddharth between the shooting from the movie Sher Shah which read 'Happy Birthday Arrest One'. Both in the picture look very cute.

However, more than Kiara's birthday post caught people's attention. That was Siddharth's response to that post. The actor thanked Kiara and wrote, 'Thanks Ki'. He also shared a heart emoji with it. Now the actor's response can explain that Siddharth calls her 'Ki'. Earlier also, on Kiara's birthday, Siddharth had also wished her a happy birthday with the same name. Sidharth Malhotra and Kiara Advani have been dating each other for nearly two and a half years. The two recently appeared together for the first time in the movie 'Sher Shah'. Sidharth Malhotra has played the role of Captain Vikram Batra, the hero of the 1999 Kargil war, while Kiara played the role of his love interest. 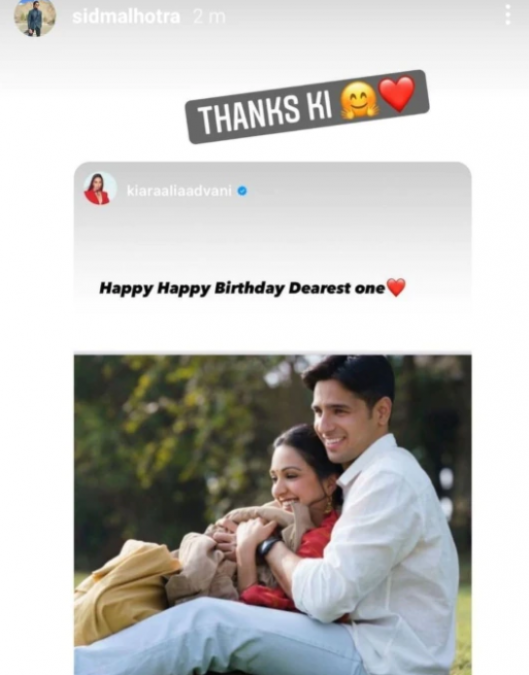