Dehradun: Chandrashekhar Azad Ravan, chief of the Bhim Army of Uttarakhand, has said that India has gone back several decades under the leadership of the PM. He also took a dig at the leaders who have self-determined themselves on the basis of Dalit politics. He said that in the upcoming elections, the BJP's actions will be avenged.

Returning from Khatima, Bhim Army Chief and Chandrashekhar Ravan, National President of Azad Samaj Party, briefly stayed at the showroom of party leader Samar Khan on Moradabad Road. Ravana said that even in the COVID-19 pandemic, the BJP government has discriminated against people on religious grounds.

BJP always does politics of religion, but people are now getting familiar with its real face. Azad Samaj Party is receiving immense support in Uttar Pradesh, Uttarakhand, Punjab, Bihar and Madhya Pradesh.

The party is going among the people on issues like freedom of expression, health, education, migration, unemployment. The Azad Samaj Party will play an important role in the 2022 assembly elections. He said that he will take revenge for the work that BJP has done to suppress his voice, including interest in the election. There was also the District President of Bhima Army Ajay Gautam. With this, Chief Ravan has kept his word.

147 people injured due to floods in Afghanistan 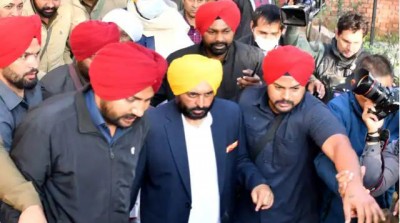