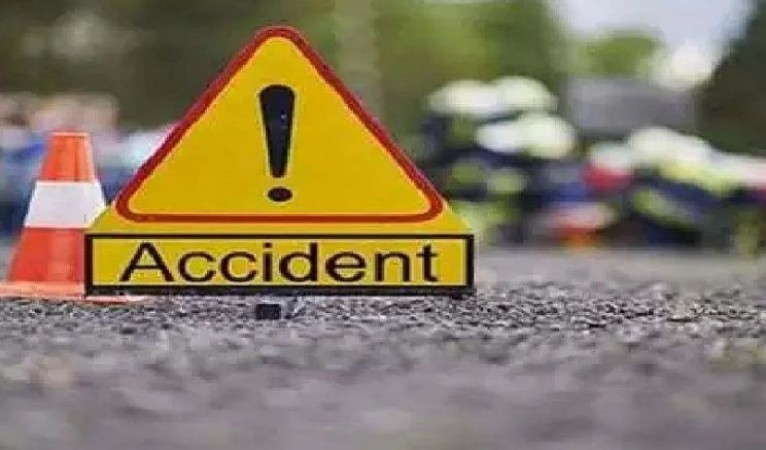 Chhatarpur: A case of a major road accident on the Jhansi-Khajuraho highway in Chhatarpur district of Madhya Pradesh has come to light. The bus driver lost control while trying to save the cow around 7 pm on Tuesday. The bus collided with a van parked on the roadside of Dhaba. Two persons returning from Agra after appearing for the revenue officer's examination in the van lost their lives on the spot. 2 is injured. The cow also died in the accident.

As per the information received, the bus number mp16P0191 of Sujat company on Jhansi-Khajuraho highway was going from Chhatarpur to Harpalpur as per routine. As soon as the bus approached Dhaba at Badagaon check post in Alipura police station area on Forlane, a cow came in front of the road. The driver lost control of the bus in an attempt to save him. The bus collided with van number MP19CB4034 parked at Dhaba. The collision was so dangerous that the van's trials were blown away. The injured were taken to community health centre Nagaon. They are being treated there. The passengers on the bus narrowly escaped the accident.

Alipura police have sent four persons to Nagaon Community Health Centre. Doctors have declared Arjun Yadav, age 25, resident Maihar and Arun Tripathi, age 38 years resident Satna, dead. Alka Singh resident Rewa and Suraj Yadav resident Maihar are still undergoing treatment at Nagaon Community Health Centre. The four occupants of the van were returning to Rewa from Agra after appearing for the revenue officer's examination. He stayed at the Dhaba to eat in the middle. In the meantime, the incident took place.