These veterans, including PM Modi, expressed grief over death of Babasaheb 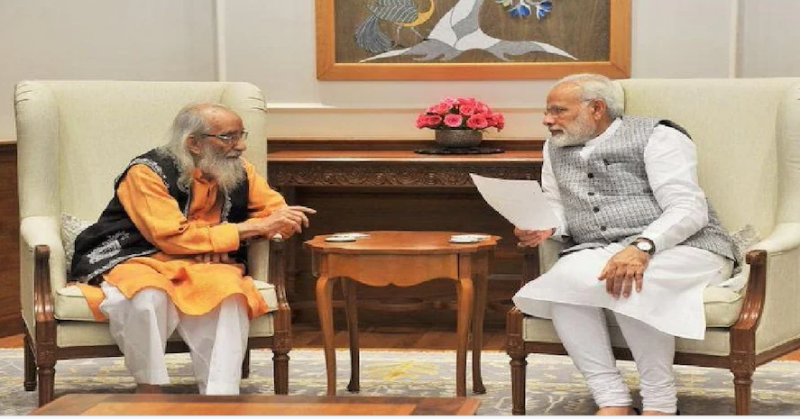 New Delhi: Renowned Historian and writer of India Babasaheb Purandare passed away at Dinanath Mangeshkar Memorial Hospital in Pune on Monday morning. He was 99 years old. According to the hospital administration, Purandare was admitted to the hospital on Saturday, November 13, 2021, after which he was put on a ventilator after the situation became serious. Since then, there has been no improvement in his condition.

This year, PM Narendra Modi has greeted Purandare through a video message. PM Modi said, "Babasaheb's work is inspiring. I have reached Pune to see Babasaheb's play 'Janata Raja' based on the life of Chhatrapati Shivaji Maharaj. Even when Babasaheb used to come to Ahmedabad, I used to attend his programmes." Babasaheb Purandare, born on July 29, 1922, has been awarded the Padma Vibhushan, India's second-largest civilian award, in 2019.

PM Narendra Modi condoles the passing away of Babasaheb Purandare. He tweeted that Shivsaheer Babasaheb Purandare will survive because of his extensive work. My thoughts in this hour of grief are with his family and countless fans. Om Shanti.

Shivshahir Babasaheb Purandare will live on due to his extensive works. In this sad hour, my thoughts are with his family and countless admirers. Om Shanti.

Home Minister Amit Shah expressed his condolences and said that he has the privilege of meeting Babasaheb Purandare a few years ago and having a long discussion. Their energy and thoughts were truly inspiring. His demise is the end of an era. I express my condolences to his family and innumerable fans. May the Lord place him in his feet. Om Shanti

NCP chief Sharad Pawar tweeted that with the passing away of Shivshahir Babasaheb Purandare, Maharashtra lost its sheen in the field of literature and art. heartfelt tribute to them!

Paswan made this special announcement after praising PM Modi