USA: After Russia's foreign minister stated that regions holding harshly criticised referendums would receive complete protection in the event that Moscow annexed those regions, the US issued a warning on Sunday of "catastrophic consequences" if Moscow used nuclear weapons in Ukraine.
On Sunday, elections were held in four eastern Ukrainian regions with the goal of annexing land that Russia had seized through coercion. Within days, the annexation could be formally recognised by the Russian parliament.

Moscow could portray attempts to retake Luhansk, Donetsk, Kherson, and Zaporizhzhia as attacks on Russia itself, sending a warning to Kyiv and its Western allies.
The US has warned Russia of the "catastrophic consequences" it would face if it used nuclear weapons against Ukraine, according to Jake Sullivan, the nation's national security adviser.

It's possible that the right wing will turn against Ukraine soon

Russia will suffer catastrophic consequences if it crosses this line. In an interview with NBC's "Meet the Press," Sullivan said that the United States would react swiftly.
Following President Vladimir Putin's Wednesday thinly veiled nuclear threat that Russia would use any means necessary to defend its territory, the US issued its most recent warning.

The point was more explicitly made by Foreign Minister Sergei Lavrov at a news conference on Saturday following his address to the UN General Assembly in New York, in which he repeated Moscow's fabrications used to justify the invasion, namely that the legitimately elected government in Kyiv had been overthrown and replaced with neo-Nazis.
When asked if there would be justification for Russia to use nuclear weapons to defend annexations, Lavrov responded that all of Russian territory, including any that might one day be "further enshrined" in the Russian constitution, "is under the full protection of the state."

The referendums have been rejected by Ukraine and its allies as a ruse orchestrated by Moscow to justify escalating the conflict and launching a mobilisation effort in response to recent battlefield losses.
Prime Minister of the United Kingdom Liz Truss urged Britain and its allies not to take Putin's threats seriously because he had made a strategic error by failing to foresee the strength of the response from the West.
We shouldn't pay attention to his empty threats and saber-rattling. Instead, we should keep imposing sanctions on Russia and support the Ukrainian people, Truss said in a Sunday interview with CNN.

Unnamed sources told Russian news agencies that the Russian parliament could start discussing bills to include the new territories as early as Thursday. Putin might address the legislature on Friday, according to state-run RIA Novosti. 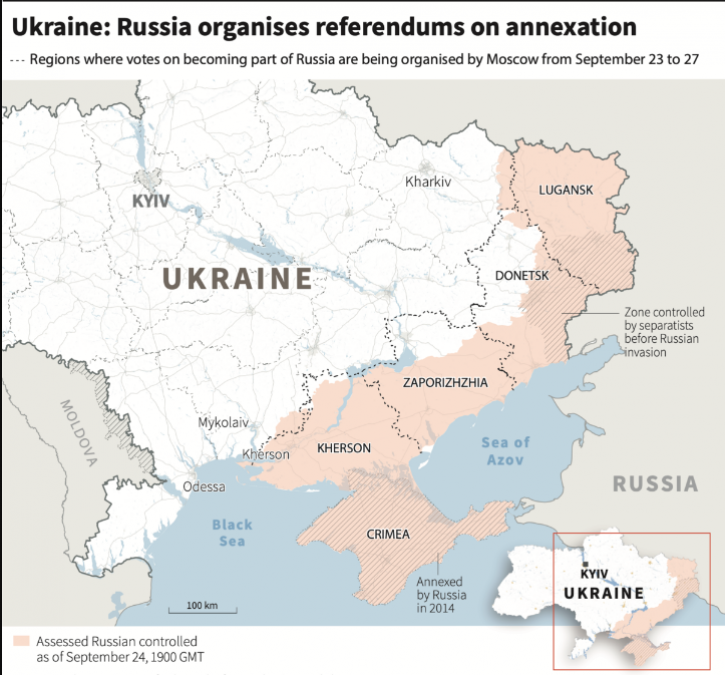 The referendums, hastily planned after Ukraine retook territory in a counteroffensive this month, according to Russia, allow residents of those regions to voice their opinions.
About 15% of Ukraine, or an area roughly the size of Portugal, is controlled by Russian forces in the four regions. It would enlarge Crimea, which Russia claims it annexed in 2014 and is almost the size of Belgium.
Each of the regions still has some areas under the control of Ukrainian forces, including about 40% of Donetsk and the provincial capital of Zaporizhzhia. Along the entire front, fierce fighting persisted, especially in Kherson and northern Donetsk.

Volodymyr Zelensky, the president of Ukraine, who maintains that his country will retake all of its lost territory, declared on Sunday that some of the clashes had "positive results" for Kyiv. "This is our Kharkiv region; this is the Donetsk region. In addition to the Mykolaiv and Zaporizhzhia regions, this is the Kherson region, Zelensky said in his daily video address.
In a statement posted on Facebook, the general staff of the Ukrainian armed forces claimed that in the previous 24 hours, Russia had attacked targets in Ukraine with four missiles, seven airstrikes, and 24 instances of shelling, hitting dozens of towns, including those in and around the Donetsk and Kherson regions.

Putin gave the first military mobilisation order for Russia since World War II on Wednesday. The action led to protests all over Russia and forced many men of military age to leave.
On Sunday, two of Russia's most senior lawmakers responded to a number of criticisms of the mobilisation by ordering local officials to immediately end "excesses" that were inflaming the populace.
According to the unbiased monitoring organisation OVD-Info, more than 2,000 people have been detained across Russia for participating in anti-draft demonstrations. The protests are among the first indications of unhappiness since the war started in Russia, where it is illegal to criticise the conflict.

Police and protesters clashed in the Dagestan region of southern Russia, which has a large Muslim population. At least 100 people were detained as a result.
In his video address, Zelensky acknowledged the demonstrations.
Keep fighting, he urged, "all those who can be drafted by this criminal Russian mobilisation, so that your children will not be sent to their deaths." As a father, I say this: "We will not let you get away alive if you come to take away the lives of our children."