The heartthrob spent a wonderful Sunday evening with his special people. Vijay Devarkonda looks amazing even at home in his casual attire. He looks dashing in a baby pink sando with black pants. Devarakonda brothers, Vijay and Anand, recently welcomed a new member into their family, a Siberian Husky whom they named Storm. Interestingly, his pet dog already has an Instagram handle @thestormdevarakonda, which has over 21,000 followers.

In the latest picture on his pet's Instagram account, Vijay takes him for a walk. Vijay shared the picture during that time and the caption reads: "Oh hi that's just my ride on a rainy day. Jokes. That's my ride almost every day Woof woof !." Vijay Devarkonda has come a long way in his career. He started his journey with the film Nuvvila in 2011. Although he only gained fame in 2016 with the film Pelli Chopulu.

Mohanlal's film 'Drishyam 2' will be full of Family drama 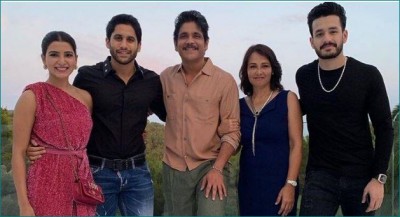