For over a decade, Kumar Abhishek has designed and implemented innovative IT solutions, currently working as a Senior Machine Learning Engineer at Expedia Group, Inc. In the process, he has earned a growing reputation as a machine learning expert who wrote a technical book on imbalanced datasets.

Abhishek has applied his skills and result-driven technology leadership to a wide swathe of projects, including several on behalf of today’s largest and most influential companies, including Expedia Group, Microsoft, and Amazon.

Working at Expedia Group and Microsoft

Abhishek’s specialty, machine learning, has produced some of the most exciting developments in AI over the last ten years. He works on fraud detection and prevention efforts at the leading travel booking company Expedia Group, Inc.

One of the most significant advantages of machine learning is its dynamism. As the machine learning pipeline is fed more data, it learns and adapts—a capability that is especially important in the cat-and-mouse world of fraud prevention and detection.

At Microsoft, he worked on Cortana, an AI-powered virtual assistant that uses the Bing search engine to perform tasks such as setting reminders and answering questions for the user.

Abhishek’s skills have earned him roles with some of the world’s largest and most innovative tech companies, including Amazon and Microsoft.

The skill level required to work with these companies is incredibly high, of course, but we were curious to hear more about what it’s like to work with one of these seemingly monolithic brands, collaborating with other high-level engineers, designers, etc.

“The scale at which my work impacts the end users posed a new challenge for me when I started at Expedia. It forced me to think at a different level—with a wider scope—than I’d grown at much smaller companies.”

Now let’s take a brief look at what Abhishek has been up to outside the office.

In addition to his day-to-day engineering work, Abhishek has also authored a book, Imbalanced Datasets in Machine Learning, set to be released next year by Packt Publishers.

Unsurprisingly, the book is primarily a high-context guide for engineers, research scientists, and data scientists working in machine learning.

“Imbalanced Datasets addresses a widespread problem faced by industry engineers and scientists. Most of the data we use is highly imbalanced; for those of us working in fraud detection, it is extremely imbalanced.”

The benefits of machine learning, both for developers and end users, cannot be ignored. Nor can the value of a healthy exchange of ideas and insights among industry experts. Keep an eye out for Imbalanced Datasets in Machine Learning, and thank you for reading.

"Opinions expressed here are of Mr. Abhishek, not his employers."

5 things that are dangerous for your skin 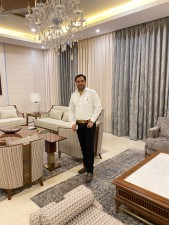