Surat: A shocking bus accident has taken place near Hira Bagh Circle in Varachha in Gujarat. In fact, a luxury bus of the capital Travels suddenly caught fire at night and the fire was so terrible that the bus became a ball of fire. The passengers on the bus came out as soon as they could to save their lives. Meanwhile, the woman in the back seat was burnt alive. At the same time, a young man who wanted to jump off the bus and save his life was also injured. The major accident reportedly led to traffic jams on the road and caused panic due to the fire. People in the vicinity continued to save the lives of the passengers on the bus.

According to the information received, many people were shouting loudly to save their lives. The fire brigade came on receiving information and the fire was brought under control after a hard fight. However, the entire bus was burnt to death in the accident. Now some videos of the incident are going viral on social media. Police said about 15 passengers were present in the bus at the time of the accident. It is also being reported that the bus was on its way from Surat to Bhavnagar near Hira Bagh Circle, it was a luxury bus. The fire broke out suddenly due to a blast in the AC compressor. In the meantime, the fire broke out so loudthat in no time it became a ball of fire.

This led to the screams of the passengers on board, and some of them ran to the front window to save their lives, and some of them jumped out of the window in fear and saved their lives. However, one youth was seriously injured and is now undergoing treatment at Smimer Hospital. A bus passenger said, "The woman in the back seat of the bus tried hard to escape but could not save herself. The woman kept trying to escape the fire, and was burnt alive. ' 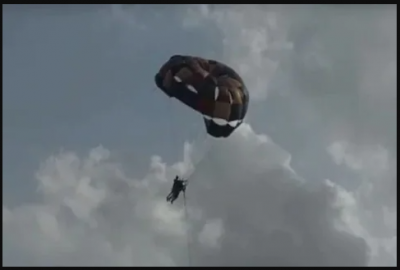