Video: 'One son has returned, other will continue to serve,' father at funeral of martyred son 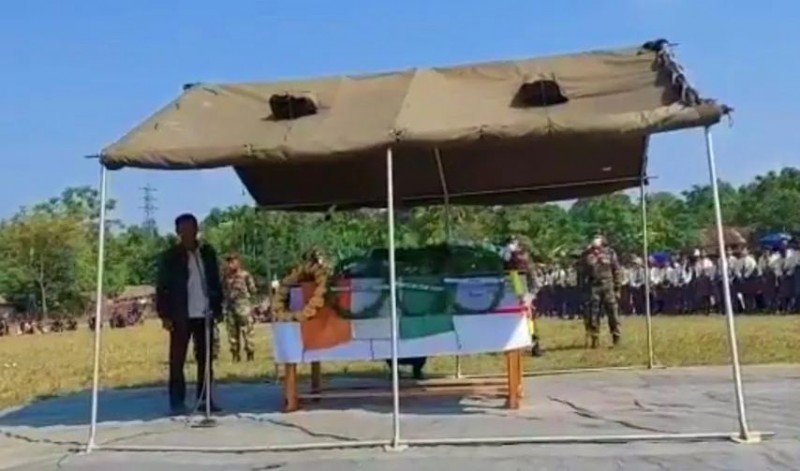 Imphal: Four jawans, including a colonel, were martyred in the Manipur terror attack. Col. Viplav Tripath's wife and innocent son were also shot in the attack. Meanwhile, a statement made by his father during the funeral of martyred jawan Kathnei Konyak is going viral on social media. Hearing this, every Indian's will be proud.

"I gave my 2 sons to make our country India strong, today 1 has returned, I have 1 more. Konyak brothers should continue serving nation like him"
Father of Rfn Kathnei Konyak who died on 13Nov Manipur incident addressing son's funeral in Tizit, #Nagaland@adgpi@easterncomd pic.twitter.com/XjxeTG8U4F

This video has been retweeted by the Indian Army itself. In the video, his father is standing near the mortal remains of Rifleman Kathnei Konyak, who was martyred in the Manipur terror attack. In the meantime, he said things that would make every countryman proud to hear. Konyak's father said another son of his is still alive. He will continue to serve the country. During the funeral of Martyr Konyak, his father said, 'I gave my 2 sons to make our country India strong, today 1 has returned, I have 1 more. Konyak brothers should continue serving a nation like him.'

On November 13, rifleman Kathnei Konyak was martyred in a terror attack in Manipur. Konyak was cremated at Tizit in Nagaland. Konyak as well as Col Viplav Tripathi, Rifleman Shyamal Das, Suman Swargeari, RP Meena were also martyred in the attack. Col Tripathi's wife and a son were also killed in the accident.