New Delhi: The Afghanistan cricket team is currently on a tour of Ireland. The first T20I of the five-match series between the two teams was played at the Civil Services Cricket Club in Belfast on August 9. Ireland won the first match very easily by seven wickets. This was Ireland's fifth win in T20 against Afghanistan. Afghanistan has previously been beaten by the West Indies (four times) in T20 Internationals and Ireland has broken the West Indies record with this victory.

In this match, Afghanistan batted first and scored 168 runs at the loss of 7 wickets. George Dockrell hit the winning boundary off the fifth ball of the 20th over as Ireland reached 171 for three to win. Afghanistan batted brilliantly in the last two overs, scoring 30 runs, including Ibrahim Zadran's unbeaten 29 off 18 balls. But, Ireland's opening batsman Paul Stirling (31 runs in 29 balls) and captain Andrew Balbirnie (51 runs off 38 balls) added 61 runs in 7.3 overs for the first wicket to give the team a solid start.

Wicketkeeper-batsman Lorcan Tucker scored 50 runs off 32 balls to keep Ireland in a strong position. Harry Tucker (25 not out) and Dockrell (10 not out) took the team to victory. Earlier, Dockrell took 2 wickets for seven runs while Barry McCarthy took 3 wickets for 34 runs. For Afghanistan, Usman Ghani scored 59 runs off 42 balls, which included 2 towering sixes and six fours. The second match of the five-match series will be played on Thursday. 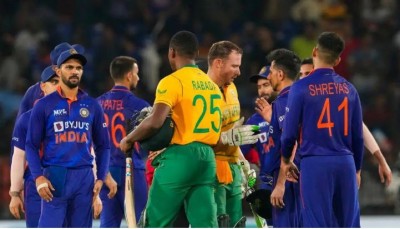