Australia paceman Mitchell Starc will play in the fifth and final Ashes Test against England in Sydney starting Thursday. After captain Steve Smith said it was likely the left-armer would return from his heel injury, Australia confirmed their team for the SCG Test. Starc, the leading wicket-taker in the Ashes series, replaces Jackson Bird in the only change for Australia. On a flat MCG pitch in the fourth Test, Bird finished with figures of 0-108. Australia paceman Mitchell Starc appears set to return from injury in the fifth Ashes Test against England as the hosts opt for one spinner.

Starc missed the drawn fourth Test in Melbourne due to a heel injury, but the left-armer's return is set to boost the hosts in the final match of the series in Sydney. Left-armer Starc is the leading wicket-taker in the series with 19 despite only playing three Tests and will boost Australia's pace attack after he missed out in Melbourne, giving way to Jackson Bird who went wicketless. 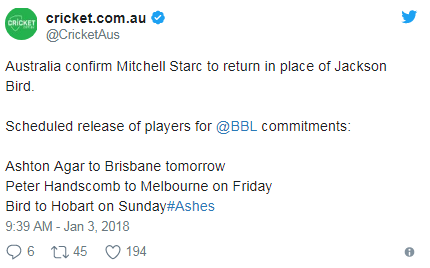 Smith, who has dominated the series with three centuries in his tally of 604 runs in six innings at an astonishing average of 151, has been troubled this week by a sore back, but said he will play.

Smith has spent more than 31 hours at the batting crease against England in this series, becoming Australia's first captain to score 600 or more runs in an Ashes campaign since Don Bradman. The 604 runs Smith has scored is the fourth-most by a captain in an Ashes series, with the 810 Bradman scored in 1936-37 the high mark. Another century in Sydney will see him join Bradman, Herbert Sutcliffe and Wally Hammond as the only men to score four hundreds in the same Ashes series. The Australia skipper averages 63.55 in his 60 Tests which places him only behind Bradman's pinnacle of 99.94.