Tv's famous actress Urfi Javed has been caught in new trouble. This has been revealed by Urfi Javed herself in one of her posts. Along with this post, Urfi has also shared a photo in which her face is seen spoiled. Urfi Javed, who made headlines due to her strange outfit, has shared several screenshots on the story of her official social media account. With these screenshots, Urfi told about such an incident that happened to her that as soon as she saw her post, it came to the headlines.

In the post, Urfi said that he had ordered the olive oil of Jivo from Amazon. It made pea cheese. Which the whole staff ate. After eating the vegetable made in this oil, Urfi's eyes suddenly swelled. Urfi wrote in the post that at first, she felt that this had not happened after eating this oil. After which she cooked the fish again in oil. Then Urfi's condition got worse, the proof of which is her photo. 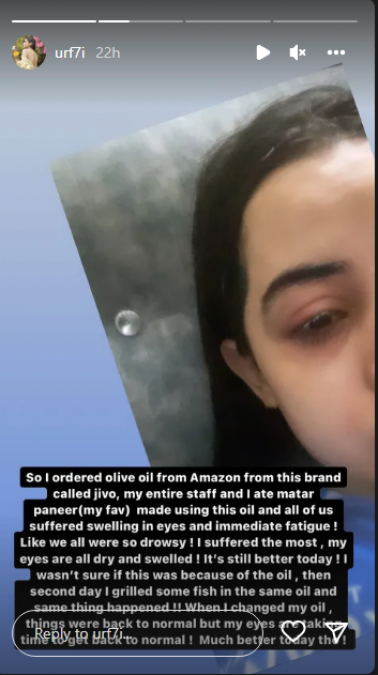 In the post, Urfi Javed claimed that the olive oil had expired, after which eating it happened to 6-7 persons as happened to Urfi. Urfi keeps wearing different strange outfits and sharing it on social media on a coming day. But for a few days, Urfi has not been sharing videos and photos with social media's new outfit. However, Urfi has definitely shared some promotional videos. 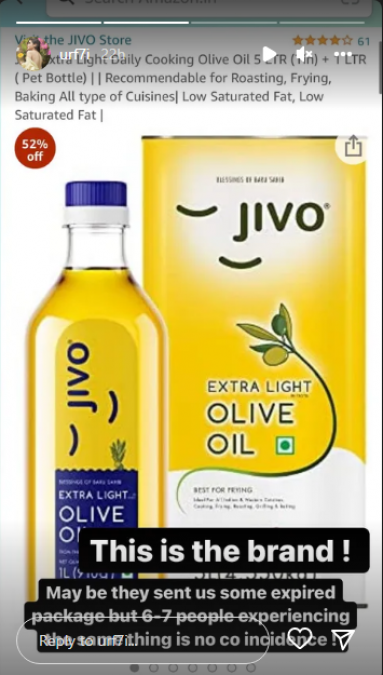