New Delhi: Heavy rains have created severe conditions in the country's states, while eastern, western and central India is expected to receive the highest rainfall till August 1, while 175 tourists have been stranded due to cloudbursts and landslides due to rain in Lahaul-Spiti in Himachal Pradesh. Heavy rain has occurred in various parts of Delhi and the NCR region, leading to a drop in temperature.

The water level of the river Yamuna in Delhi increased to 203.37 metres after the highest rainfall, which is around 204.50 metres. The administration had issued an alert in the lower reaches of the submerged area of the river and the situation is being monitored round the clock. The MET department said Delhi recorded most of the temperatures at 27.6 degrees Celsius which was seven degrees below normal.

At the same time, the MET department has issued a 'red alert' in several cities of Rajasthan on Friday warning of very heavy rainfall. The MET department says that in the coming times, many parts of the state will receive heavy to very heavy rainfall. According to the Jaipur Meteorological Centre, the active southwest monsoon in the state will gain momentum in the coming few days. The Centre on Friday issued a 'red alert' warning of very heavy to very heavy (up to 115.6-204.4 mm) rainfall in Nagaur, Sikar and Ajmer districts of the state.

Orange Alert for 15 districts of MP:-
IMD has issued an orange alert in 15 cities of Madhya Pradesh expressing the possibility of heavy rains and lightning in the next 24 hours. According to IMD, an orange alert has been issued in the cities of Sheopur, Morena, Bhind, Tikamgarh, Chhatarpur, Sagar, Datia, Shivpuri, Anuppur, Dindori, Neemuch, Mandsaur, Ratlam, Balaghat and Mandla in Madhya Pradesh in the next 24 hours with the highest rainfall and lightning and possibility of lightning and falling.

Weather in Uttar Pradesh, Haryana and Punjab:-
Heavy overnight rainfall due to low pressure in Bangladesh and West Bengal has affected normal life in Kolkata and some southern districts of the state on Thursday. The MET department has predicted heavy to very heavy rainfall in Kolkata by Friday morning. Light to moderate rainfall occurred at most places in western and eastern Uttar Pradesh in the last 24 hours. Fatehpur, Chitrakoot, Kheri, Badaun, Agra, Saharanpur and Muzaffarnagar districts recorded rainfall and rainfall is likely to continue till August 1. Rain occurred in some parts of Haryana including Ambala, Hisar, Narnaul, Rohtak, Gurgaon and Bhiwani. Amritsar in Punjab recorded most of the temperatures at 33 degrees Celsius.

38 monkeys were tragically poisoned to death, first locked in sacks and beaten, then...

Called Goa on the pretext of a job, then raped! 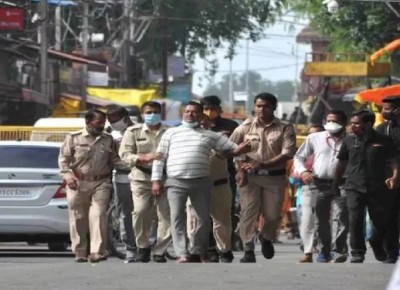