Before marriage, father-in-law asked for proof of manhood, son-in-law gave this thing in hand Kolkata: The tradition of figuring a bride and groom's horoscope before marriage is now outdated. In fact, in today's world, many people are also getting thalassemia, HIV, hepatitis B, hepatitis C tested. But, in Kolkata, a man has gone too far to ask for an examination report of his son-in-law's sperm. The report has been sought to find out if their son-in-law is able to have children. 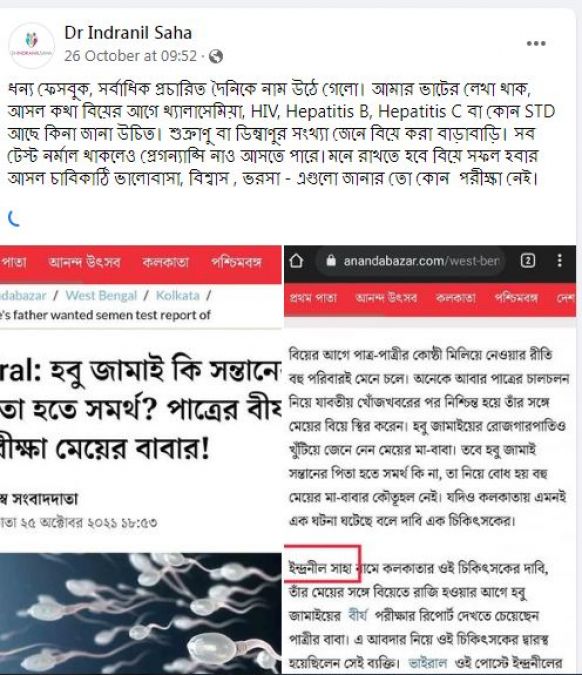 Noted gynaecologist Dr Indranil Saha of Park Street, Kolkata, shared information about the matter on his Facebook account. According to him, a man had recently come to him with a request to test his sperm count. He said his future father-in-law had made this demand. Dr Saha was stunned to hear this. However, Dr Saha gave the inquiry report to the youth and kept his name secret. The doctor wrote on his Facebook post that the future father-in-law may then want to know if his future son-in-law is able to have sex.

Dr Saha further wrote that the groom did not then sit anywhere demanding an examination report of the daughter-in-law's fallopian tube to ascertain whether the bride could become a mother or not. However, the doctor has finally written that the real key to a successful marriage is love and trust, which there is no test in medical science to know.

This penis mushroom in the discussion, know its speciality The year 2022 will be full of disasters, everything may be over!

Army of crabs on Australian streets will blow your senses