Srinagar: The Jammu and Kashmir government has dismissed four government employees, including the wife of militant Bitta Karate. According to the report, all four have been removed from service due to terrorist links. Bitta is facing charges related to karate terror. At the same time, he has also been involved in the brutal killings of Kashmiri Hindus.

In 1990, more than 1,00,000 Kashmiri Hindus were forced to flee their homes by Islamic fundamentalists. Thousands of Kashmiri Hindus were rendered homeless overnight. The killings of Hindus and spreading panic in Kashmir started in 1989. Bitta Karate alias Farooq Ahmad Dar had become synonymous with panic in the Valley at that time. He used to search and kill Kashmiri Hindus.

In an interview, Bitta Karate himself confessed that the first blood he had done was of a man named Satish. Bitta had also said that he used to commit murders with pistols. He often went out to kill alone and did not wear a mask. The local people there also supported him in this work. He had confessed on camera that 20 Hindus were killed on the orders of Jammu Kashmir Liberation Front (JKLF) leaders. The same Bitta's wife was till now doing a government job in Jammu and Kashmir and was nurturing separatism by getting benefits from the government. 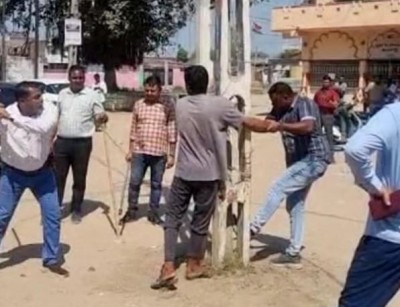