DINDIGUL:  K. Maya Thevar, a former member of parliament and a prominent member of the All India Anna Dravida Munnetra Kazhagam (AIADMK), passed away on Tuesday afternoon at his home in Chinnalapatti, close to Dindigul, due to illness. He was 88.

Maya Thevar, the first MP of the AIADMK, was born on October 15, 1934, in the Madurai district at T. Uchapatti, close to Usilampatti. After completing his education at St. Xavier's Higher Secondary School in Palayamkottai, he attended Pachaiyappa's College in Chennai to earn his bachelor's and master's degrees.

He pursued legal studies at Madras Law College, which is now known as Dr. Ambedkar Law College, where he received his M.A.B.L. He was a well-known attorney working for the Madras High Court, and his enthusiasm for politics got him elected to the party's board of directors.

It should be mentioned that when former chief minister and AIADMK founder M.G. Ramachandran founded the party,  Maya Thevar won the party's first election by running for the Dindigul Lok Sabha seat in 1973 using the "two-leaves" symbol.

Maya Thevar who represented the party in the election , and made its triumphant entrance into electoral politics. He then quit the AIADMK and joined the DMK, running for office on their behalf in 1977 and winning the Dindigul constituency. For the past 15 years, he has not participated in politics in a significant way.

In his letter of condolence, the interim general secretary of the AIADMK, Edappadi K. Palaniswami, lamented the passing of the senior politician and recalled his election triumph in 1973. O. Panneerselvam, the ousted AIADMK leader, also sent his sympathies to the family.

On Wednesday, the funeral will take place at his Chinnalapatti home. 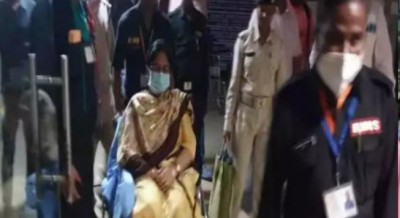