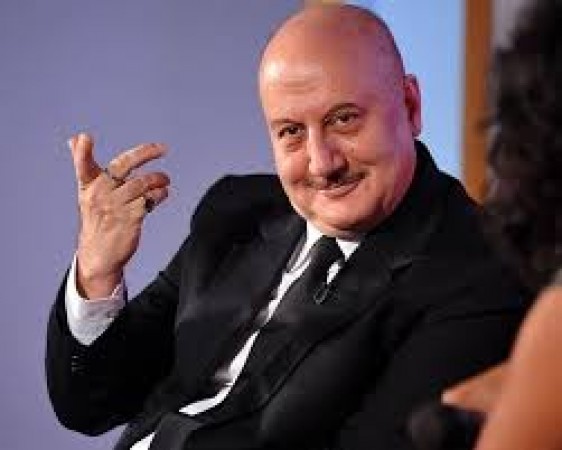 Ever since the Central Government announced the Citizenship Act and NRC, there have been repeated protests in many parts of the country including Delhi. Along with this, violence erupted during protests against CAA and NRC in North East Delhi in the past. More than 25 people have died in this violence, although hundreds of people are injured. Bollywood stars also reacted to this incident. Meanwhile, Bollywood actor Anupam Kher has targeted the tweet of famous writer Chetan Bhagat regarding the Delhi violence. In fact, Chetan Bhagat recently tweeted about the Delhi violence. He wrote in his tweet, 'India 1947: Hindu Muslim Hindu Muslim Meanwhile world: moon landing, computers, internet, artificial intelligence, cellphones, smartphones, apps. India 2020: Hindu Muslim Hindu Muslim."

At the same time, the world reached the moon, made computers, internet, artificial intelligence, cell phones, smartphones and apps, but India is stuck on Hindu Muslim and Hindu Muslim even in 2020. ' Actor Anupam Kher has reacted to this tweet, including all social media users. Bollywood actor Anupam Kher, reacting to Chetan Bhagat's tweet, wrote, 'Dear
@chetan_bhagat
! With this tweet you are not only belittling yourself but millions of Indians. Both Hindus and Muslims!! In the last 72 years India has achieved phenomenal success in almost every field. This tweet is just a smart tweet but far from the truth.:) #NotCool."

For your information, let us tell you that National Security Advisor (NSA) Ajit Doval took the front on Wednesday to handle the situation after the violence in North East Delhi.

Simultaneously, PM Modi gave Doval the responsibility of handling the situation after a review meeting on the violence, after which he held a meeting with the top officials of the Delhi Police and reviewed the situation in some violence-prone areas in the afternoon. On Wednesday afternoon, a convoy of vehicles is seen growing in Maujpur area of Delhi. One of these vehicles was the National Security Advisor (NSA). Upon reaching Moujpur, Doval got down from the car and proceeded to talk to the people involved. Along with this, he came to visit the violence affected areas in the North-Eastern district. During this time, he shook hands with the people of the area, placed his hand on the shoulder and heard their sorrow and pain. With this, he said that what has happened is done. Now nothing will happen. Things will be fine soon there. The locals complained to the NSA of the Delhi Police. Wherever they went, there was a growing confidence in the people. He told the people that the Delhi Police is acting promptly. Along with this he has visited Maujpur, Karaval Nagar, Ghonda, Zafarabad and Chand Bagh.

Dear @chetan_bhagat! With this tweet you are not only belittling yourself but millions of Indians. Both Hindus and Muslims!! In the last 72 years India has achieved phenomenal success in almost every field. This tweet is just a smart tweet but far from the truth.:) #NotCool https://t.co/1xTIxD44Vj