During that time, when the British arrested him for participating in the movement, he said something in front of the judge that the judge was surprised. During that time, the judge questioned him about his name and his father's name. So in response, Chandrasekhar had said, "My name is Azad, my father's name is 'Swatantrata' and address 'Karawas'". After this incident, he came to be known as Chandrashekhar Azad. He was the leading fighter of the Indian freedom struggle and he inspired millions of youth of the country. He was one of the companions of revolutionaries like Pandit Ram Prasad Bismil and Sardar Bhagat Singh. In the year 1922, when the Non-Cooperation Movement came to an end, Azad became involved in revolutionary activities and became an active member of the Hindustan Republican Association. He then carried out the Kakori incident on 9 August 1925 under the leadership of Ram Prasad Bismil and fled to escape arrest.

During that time Chandrashekhar Azad built a cave 8 feet deep and 4 feet wide in a temple near Jhansi. While there he used to live in disguise as a monk. It is said that as soon as the British came to know about this, he escaped wearing the costumes of the woman. Chandrasekhar Azad's last encounter took place in a park in Allahabad where the police surrounded him. During this time, the police started firing on him. When Chandrasekhar Azad finally came to an end with bullets, he shot himself out of the last one, upholding his pledge to never be arrested alive by the British. Uttar Pradesh: 3 Of Family Killed As Car Collides With Bus 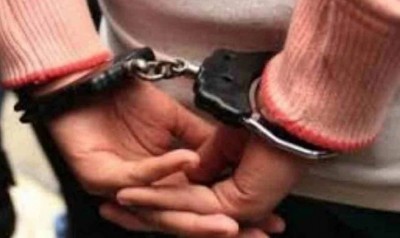