Urfi Javed has been a part of the limelight ever since she left Bigg Boss OTT. It has rarely been seen that a star has become so popular only after leaving in the first week. But with increasing fame, there are often some troubles that also bring along. Something similar happened to Urfi when she has been receiving threats to lodge a police complaint (Police Complaint against Urfi Javed) on social media platforms.

Recently, Urfi has played a segment named 'Ask Me a Question' with fans on Instagram. But earlier this question had asked the actress to lose her sense. In one question, a user scared her by writing that he could file a complaint against her. After hearing that, Madam was scared for a second.

But the twist in the game came when Urfi read the user's entire question. In the question, the user wrote, "I will file a complaint against you, how pretty and beautiful you are... Yes, there was also talk of punishing the actress for her beauty. The ground had slipped under the actress's feet after reading this user's questions, but it was only when she read the whole thing that she came to her sense. The actress replied to the man and wrote, "I was very scared for a few seconds.

Urfi Javed often makes headlines among the audience with his colourful looks. Urfi goes out between media cameras every day to show off her glam style with a new style. Urfi has always been trolled a lot on social media. But people's judgment has no effect on madam. Urfi has seen a lot of ups and downs in her life since childhood and now Urfi doesn't want to push herself back because of those judgments. 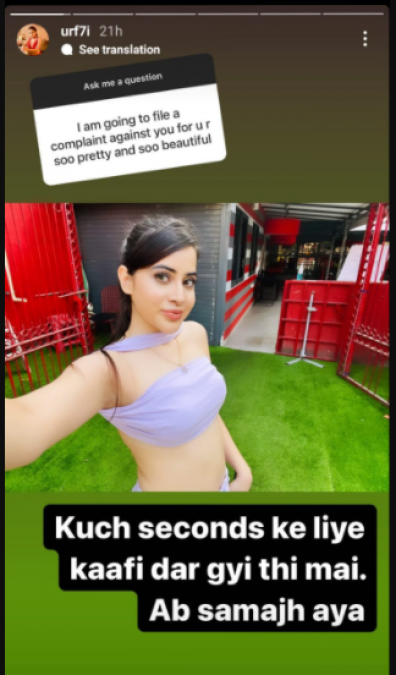