USA: In an effort to boost market sentiment due to yuan weakness and record outflows from Chinese assets, the Chinese central bank published an article claiming that the current round of US dollar appreciation has "limited upside" from its peak. but" has been reached.

The US dollar came under pressure on Thursday after US Federal Reserve Chairman Jerome Powell said rate hikes could be scaled back "as far as December", pushing the Chinese yuan to a two-week high.

Additionally, according to an article published by Financial News on Thursday, the prospect of a slower rate hike by the US Federal Reserve could halt the "upward momentum of the dollar".

According to the article, "Overall, a decline in the US dollar may mean that the current round of appreciation has peaked, with little room for a subsequent rally."

However, this does not mean that the cycle of US dollar appreciation is over. For some time to come, the US dollar will remain strong, and it may take some time to enter its depreciation cycle.

A fourth consecutive 75-basis-point rate hike by the US Federal Reserve was announced in November, pushing benchmark interest rates to their highest since 2008 and widening the monetary policy gap between the world's two largest economies done.

According to a Financial News article, there is a possibility that the US will experience a recession in the first half of 2023. 2019 or even less.

The US Federal Reserve is expected to announce a small increase in interest rates in two weeks, after raising its range from near zero in March to between 4.25 and 4.5 percent.

Also Read:  Seventy prisoners are buried collectively in the largest prison in the Philippines

Commerzbank said on Thursday that the yuan's recent strengthening was probably due to better sentiment about the prospect of China's reopening after health officials announced they would accelerate vaccination of the elderly and against strict local government control measures. Will issue a warning. ,

The yuan has stabilized in recent weeks, but has lost up to 13% of its value against the US dollar this year.
The zero-Covid stance remains largely in place, and Commerzbank predicts that the reopening will be difficult and uncoordinated.

Since April, Chinese government bond yields have declined relative to US Treasury yields, which has seen record inflows of foreign capital.

Foreign investors pulled $8.8 billion out of Chinese stocks and bonds in October due to changing sentiment about geopolitical issues and concerns over Beijing's zero-Covid policy, according to the Institute of International Finance.

Although the yuan has stabilized in recent weeks, its value has fallen by 13% against the US dollar this year. Commerzbank predicted that the reopening would be challenging and disorganized, and the zero-Covid stance largely remains in place.

Also Read:  Zelensky : Since Russian invasion, up to 13,000 Ukrainian soldiers have died

Since April, Chinese government bond yields have fallen below US Treasury yields as foreign capital has flown in at a record rate. Foreign investors pulled $8.8 billion out of Chinese stocks and bonds in October as a result of changing opinions on geopolitical issues and concerns about Beijing's zero-Covid policy, according to the Institute of International Finance. 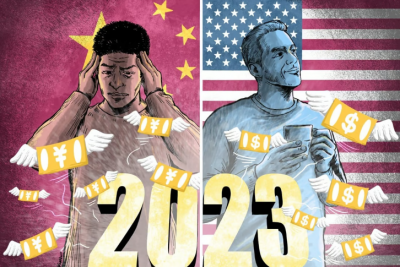