Ratlam: Surana village under Ratlam district of Madhya Pradesh, which has a population of about 2,200. The majority community in the village is Muslim, which is 60 per cent of the total population. Whereas, 40 per cent are Hindus. Nowadays this village is in the news. The Hindu community, which lives here, is now fed up with the persecution of Muslims and are forced to flee the village. They submitted a memorandum to the collector in the name of CM Shivraj Singh Chouhan and expressed their anguish and said that they were forced to give up everything including the village, lands and houses in three days. 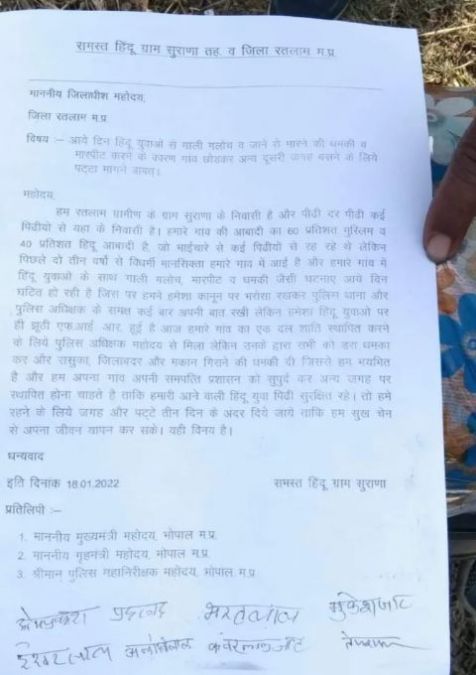 According to the report, the Hindu community in Surana village of Bilpank police station area of the district alleges that being a majority, the Muslim community harasses and threatens them. In such a situation, they are left with no choice but to flee. The collector of the district had also visited the village on Wednesday (January 19, 2022) and tried to find out the situation there. On the other hand, The State Home Minister, Dr Narottam Mishra has sought a report from both the Superintendent of Police and the Collector in this regard.

Talking to reporters at the SDM office, Dashrath, Mukesh Jat and Bharatlal Jat expressed their anguish. They said Hindus and Muslims lived together in the village for generations. But for the last 2-3 years, the terror of Muslims in the village has increased. These people are targeting Hindus day in and day out and attacking them. Besides, false cases are also being registered against Hindus. On the other hand, SDM ML Arya says that no one will have to flee the village, we will not allow such a situation to arise. According to the official, the administrative team will go to the village and interact with the people. On the other hand, fed up with the torture of Muslims, people have put up posters of the house being sold.