New Delhi: Draupadi Murmu's name for the presidency by the BJP-led NDA alliance is not going down well with many, especially the opposition. That is why fake claims are being made on social media against a tribal woman leader on her behalf. Supreme Court lawyer Prashant Bhushan, who is considered to be a staunch opponent of the Modi government, is also among these people. Bhushan shared a picture of Draupadi Murmu claiming that if she becomes the President, the BJP and RSS will work from behind, and only her stamp will remain. Not only this, but Prashant Bhushan also said that Murmu will not be able to take charge independently. 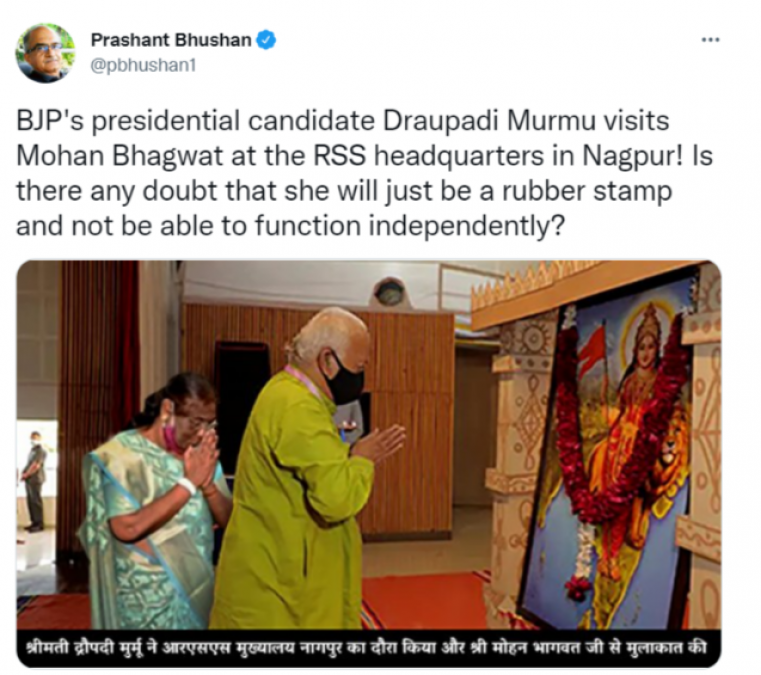 Prashant Bhushan has shared a picture to prove his claim. In this photo, RSS chief Mohan Bhagwat and Draupadi Murmu are seen bowing down in front of Bharat Mata. Along with this picture, Prashant wrote, "BJP's presidential candidate Draupadi Murmu went to RSS headquarters in Nagpur to meet Mohan Bhagwat! Is there any doubt left that she will only be a pawn and will not be able to work independently?'' However, Prashant Bhushan later deleted his tweet. The reason is – it's fake.

In fact, the picture that Prashant Bhushan has shared is edited and a photo has been prepared by cutting two photos. A photo was posted on RSS Twitter on March 11, 2022. In it, Mohan Bhagwat was paying obeisance to Mother Bharati at an event in Gujarat. He was accompanied by Dattareya Hosbole. In the picture, you can see that the background is the same, the clothes are the same, just Draupadi Murmu is not in this picture.

Now the question is how this photo of Draupadi Murmu came here. So let us know that this photo was published in the article of the news portal 'The Quint' on June 24, 2022. In the article, Draupadi Murmu was greeting Jharkhand Chief Minister Hemant Soren and Soren was also bowing down to her. The same photo was added to the edited picture and Prashant Bhushan also shared it to spread lies among the people. However, when it was later said by the social media users that it is a manipulative tweet, Prashant Bhushan deleted it. 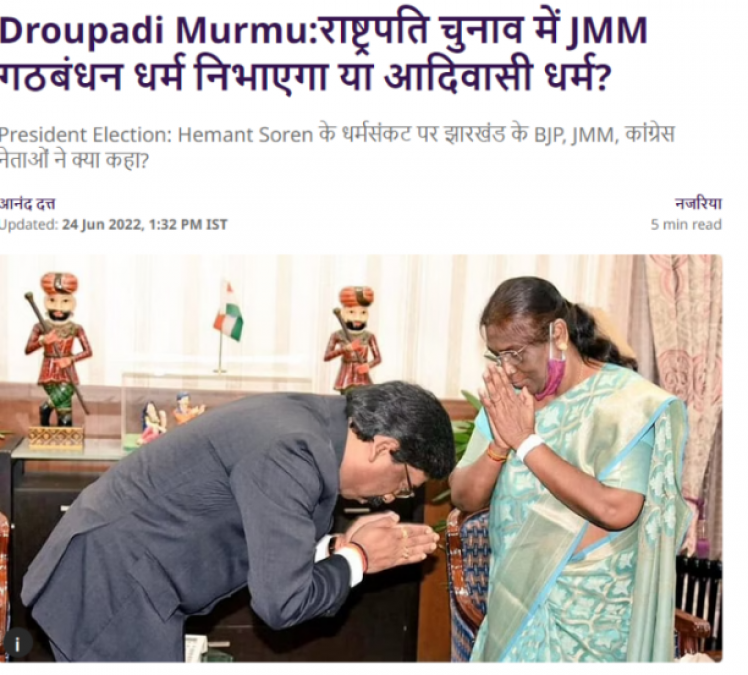 Let me tell you that, this is not the first time that Prashant Bhushan has spread such fake news, he has been notorious for spreading fake news for a long time. Last year, he had spread many kinds of false news about masks, corona, vaccines, and its effect.