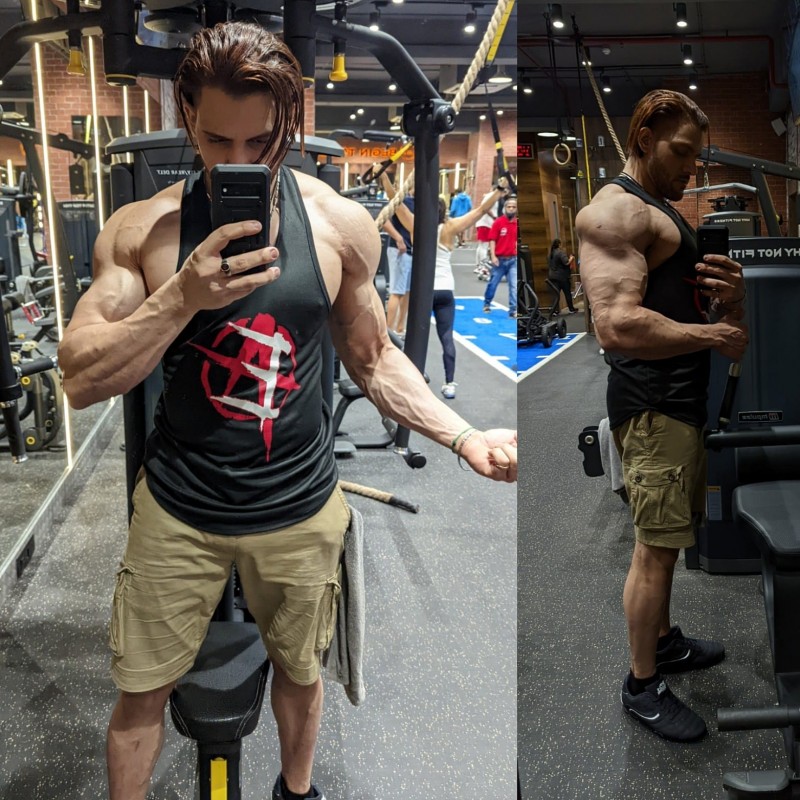 Harraj s lamba one of the Handsome bodybuilder in the world, traning gold's Gym Venice los Angeles California  6'4 tall 260lbs ripped, holds a personality not less then a movie star , white skin- blonde hair Sharp jawline Gaining the thirst for lifting in college, harraj lamba has been rising to the top from the first moment he started lifting weights at home. From that point onwards, harraj now Represents Brand Enhanced athlete

Harraj is a true model for anyone who wants to see how success is made in the world of bodybuilding. This is his story: Though some may be able to throw a stone up a hill I am prepared to push a boulder up a mountain lest I do not try.” Set your goals high, and don’t stop until you get there.”

Harraj Lamba born in mumbai india. Spend most of the time traning gold's Gym Venice los Angeles California learning about Traning,nutrition & bodybuilding chemistry etc. Home Workouts To Pro Status Harraj lamba  first started lifting when he was 18 years old as a skinny teenager wanting to improve his strength and overall size. He was inspired to go further when he met a friend in college who was very muscular and ripped.

Harraj asked his friends how he managed to get so big. His friend replied that he bought some weights and would do his workouts at home. Harraj  went out and bought a set of weights with no delay. Ever since that moment, harraj  fell in love with bodybuilding. “I purchased weights that same day, and fell in love with working out. I remember I would get back from college excited to train.”

When he first started weight training, he recalls working out every day without fail. He soon realized he was on to something big when; “I was training in my living room and a friend of my brothers who had  not seen me in a while came over and was shocked and said I was huge. That really motivated me to go at it even harder.”

With this new found motivation, he upped his game and went to buy some new weights that were heavier. Ever since then, he’s been researching and learning the bodies anatomy and muscle groups. Harraj Lamba has been finding new ways to improve his physique since day one.  “Do the best you can until you know better. Then when you know better, do better.”

As harraj built his strength and knowledge of keeping fit over the years. He’s now a firm believer in training heavy, both physically and mentally.“I say mentally because nothing gives me the same buzz as moving a tremendous amount of weight.”

“I normally do a warm-up set then go straight into lifting heavy. This has been the most effective way for me to pack on size.”

Harraj's advises that muscle growth occurs when your body is trying to repair the damage done by lifting weights on your body. Over time, your body will adapt to even the toughest routines. To make sure that he doesn’t hit a plateau, harraj  will change and cycle his routines every so often.

A week’s workout will look something like this for Harraj :

If you’re looking to build muscle like Harraj's there are three exercises he recommends which are the best to add to your training routine. These are:

Squat – “Absolutely nothing is more difficult and produces more results than the squat, nothing.”
Bench Press – “The bench press is fundamental in a bodybuilders routine, you get to move a lot of weight through multiple muscle groups.”
Deadlifts – “The deadlift is the king of mass gaining exercises, it works more muscles simultaneously than any other movement.”

Harraj's  diet is very strict, this means, he’ll say lean most of the year round. But if he does need to cut a little further, he’ll go out for a brisk walk, or on the treadmill, or even the step machine. This goes to show how important diet is, get this right, and there won’t be much need for cardio at all, advises
Harraj

Harraj s lamba “I eat a lot of chicken, fish,  and I love vegetables.”

Harraj's diet is like most professional bodybuilders and fitness models – strict and accurate to his training needs. His diet is clean all year round, allowing the odd cheat meal occasionally to keep him satisfied, along with his metabolism ticking over nicely.

Inspired to reach your true potential like Simeon? Read our complete guide on how testosterone booster supplements can really enhance your game!

Harraj lamba “I receive so many Dm's on Instagram, people who are inspired by me, this motivates me more than one anything, when I train now I feel like I am doing it for them too, I feel like I need to show them all what can be achieved through natural bodybuilding if you put in 110% and do it right.”

In the beginning, when he was asked where does his motivation come from, he only had one answer, “it’s really simple, that’s fun and enjoyment.” But, as the years passed and he became more involved with the fitness world and bodybuilding, he became a perfectionist of the sport and his motivation then went from “fun and enjoyment,” to total professionalism. “I have always strived to be better, I love to see progress and I want to achieve the unimaginable.” – Harraj Lamba

If you want to grow like harraj lamba but you don’t know how, you can start as he did with weights at home reading and researching your idols. In no time at all, you too could have your very own physique of greatness like Harraj s Lamba