'Global actress' Priyanka Chopra is said to be one of the other actresses in the limelight. She remains in the news for some reason or the other. The actress, along with husband Nick Jonas, had welcomed The Sangbati Malati Mary to the world through surrogacy in January this year. After the full 100 days of the birth of the daughter, the couple brought the daughter to their home, after which the new parents' happiness was like the 7th sky. At the same time, after welcoming her daughter into the house, Priyanka had gone to the set of her upcoming movie Citadel, from where she has shared her photos. This picture of the actress is going viral on social media very fast.

Priyanka Chopra has shared these photos on her Instagram story, in which she is seen sitting on a chair. Meanwhile, she looks very hot in a red outfit. Sharing the picture, Priyanka wrote- "I am back on the sets of Citadel.'' Fans are showering a lot of love on this picture of the actress and are also busy giving their reaction by commenting.

According to reports, Priyanka Chopra had shared the first photo of her daughter Malati Marie Chopra Jonas on Mother's Day on social media, in which she is seen holding her darling husband Nick on her chest. However, the little one's face was not seen in this picture. Sharing the first pictures of her daughter, the actress has said that the month gone by was like a roller-coaster for her and Nick. After spending more than 100 days at NICU, his little angel came home, the joy of which he cannot even express. 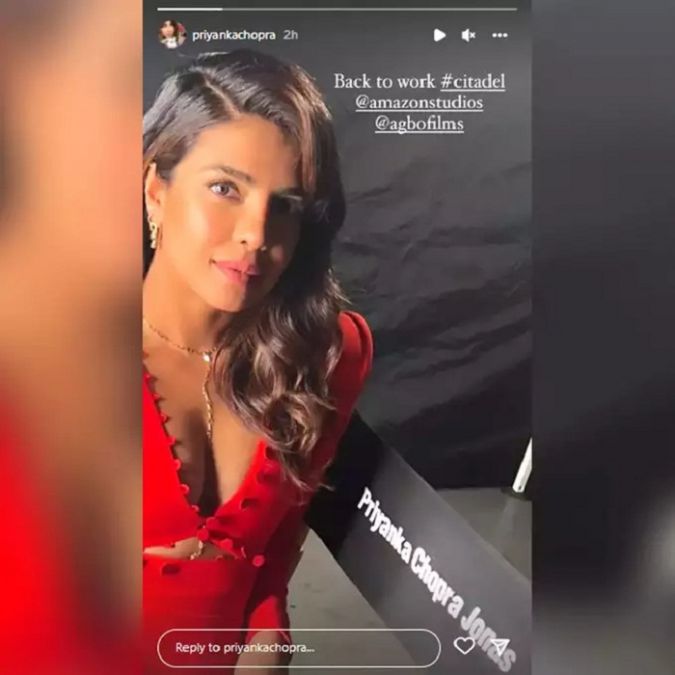