Famous Grease star, activist, and multiple-Grammy awards-winning singer, Olivia Newton-John passed away aged 73 this Monday. The actress and singer battled cancer for around three years. The news was broken to the public via Instagram through an emotional message. Several celebs took to social media to pay heartfelt tributes to the actress.

Apart from her Grease co-star, John Travolta who shared an emotional message to mourn the loss of Newton-Joh, actress Priyanka Chopra too took to her Instagram stories to share a heartfelt tribute to the legendary singer and actress. Sharing an old photo of Olivia Newton-John, Priyanka wrote, "Rest in Peace, Olivia Newton-John. Your legacy will always shine on." 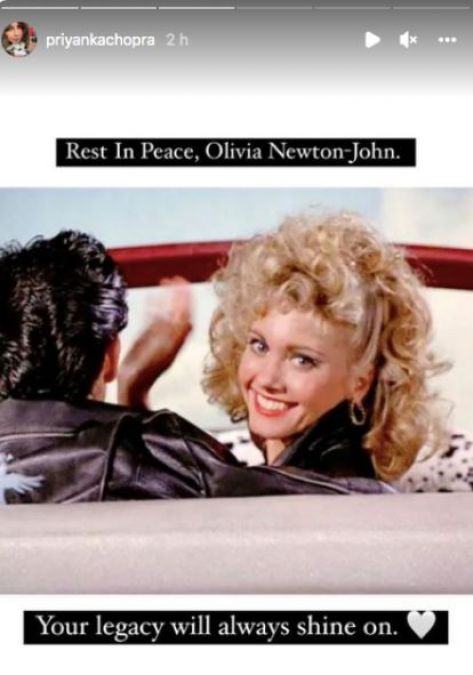 Remembering her amazing contribution to the film and the world otherwise, John Travolta in his tribute wrote, "My dearest Olivia, you made all of our lives so much better." The actor also made a Grease reference in his tribute as he wrote, "Yours from the first moment I saw you and forever! your Danny, your John!" The photo posted by Priyanka Chopra of the late actress happened to be a still from Grease, the musical that made Hollywood history. In the film set in the 1950s, had Newton-John plays the character of Sandy who has a summer fling with Danny, the "greaser" portrayed by Travolta.

Olivia Newton-John made a major impact on Hollywood as an actress and a musician; hence, her death has been mourned by several other celebrities including Grease director Randal Kleiser, Kylie Minogue, Hugh Jackman and more.